More than 300,000 people left New York City between March and October of 2020—a mass exodus fueled by the pandemic. Among them were Josh Karam and Erika Mozes, co-founders of the venture-backed tech company Hyr.

Josh and Erika had been living in NYC, where Hyr is headquartered, since 2016. But like many other New Yorkers, they decided to quarantine somewhere with a bit more fresh air and room to stretch their legs.

Their destination? A cabin in Haliburton County, Ontario, Canada.

“We’re here now looking at trees and a lake and life is pretty great,” Josh told me over the phone. “If you’re gonna run a company, you might as well run it from a place with a view like this.”

Haliburton is a small tourist area about three hours north east of Toronto, where Josh and Erika are originally from.

Its popularity stems from qualities like its cozy cabins, outdoor activities like skiing, and proximity to nature—Haliburton borders the popular Algonquin Provincial Park.

Josh and Erika walked into that sporting goods store in September to buy some cross-country skis, and were surprised to see them marked down 50%. That is, until they learned that after 30 years in business, the owner was retiring and no one had come along to buy the store.

That meant the sports-loving town of Haliburton would be without a sporting goods store. The nearest one would be over an hour away.

A few minutes into their ride home, Josh and Erika turned to each other and said “What if we opened a sports store in Haliburton?”

Without wasting any time, Josh and Erika found a storefront, leased the property, and put a sign in the window announcing that Delancey Sports was coming soon.

“In New York, we lived at the corner of Suffolk and Delancey. When we bought our cabin we named it the Suffolk. So when we opened our sports store, we named it Delancey Sports.”

Rather than purchasing the assets from the original owner of the sports store, Josh and Erika weighed their options and opted to start from scratch instead. Going from zero to fully-opened store in a matter of weeks is no small feat, especially as first-time store owners, but Josh and Erika were up for the challenge.

“This is what we do,” said Josh. “When we have an idea we jump in. In our case, there’s a proven opportunity. It’s something the community needs and wants, and if nothing else, it’ll be really exciting.”

"When we have an idea we jump in."

The right time to open a store

Not only were Josh and Erika working on a tight timeline. They were also hoping to open their store in the middle of a pandemic—an event that’s caused nearly 100,000 businesses to permanently shut down—and right before the holidays.

But neither of those things concerned them. In fact, it was strategic.

“If we were opening a restaurant, the pandemic would have dramatically impacted our plans. But opening a sporting goods store? Now’s the time.”

Josh was referring to the massive spike in sporting goods sales brought on by the pandemic, since most sporting goods stores’ merchandise lends itself to pandemic-friendly activities like at-home exercise and outdoor activities.

They also knew they wanted to be open by the time people started doing their holiday shopping, since many retailers make an outsized portion of their annual revenue during the holiday season. 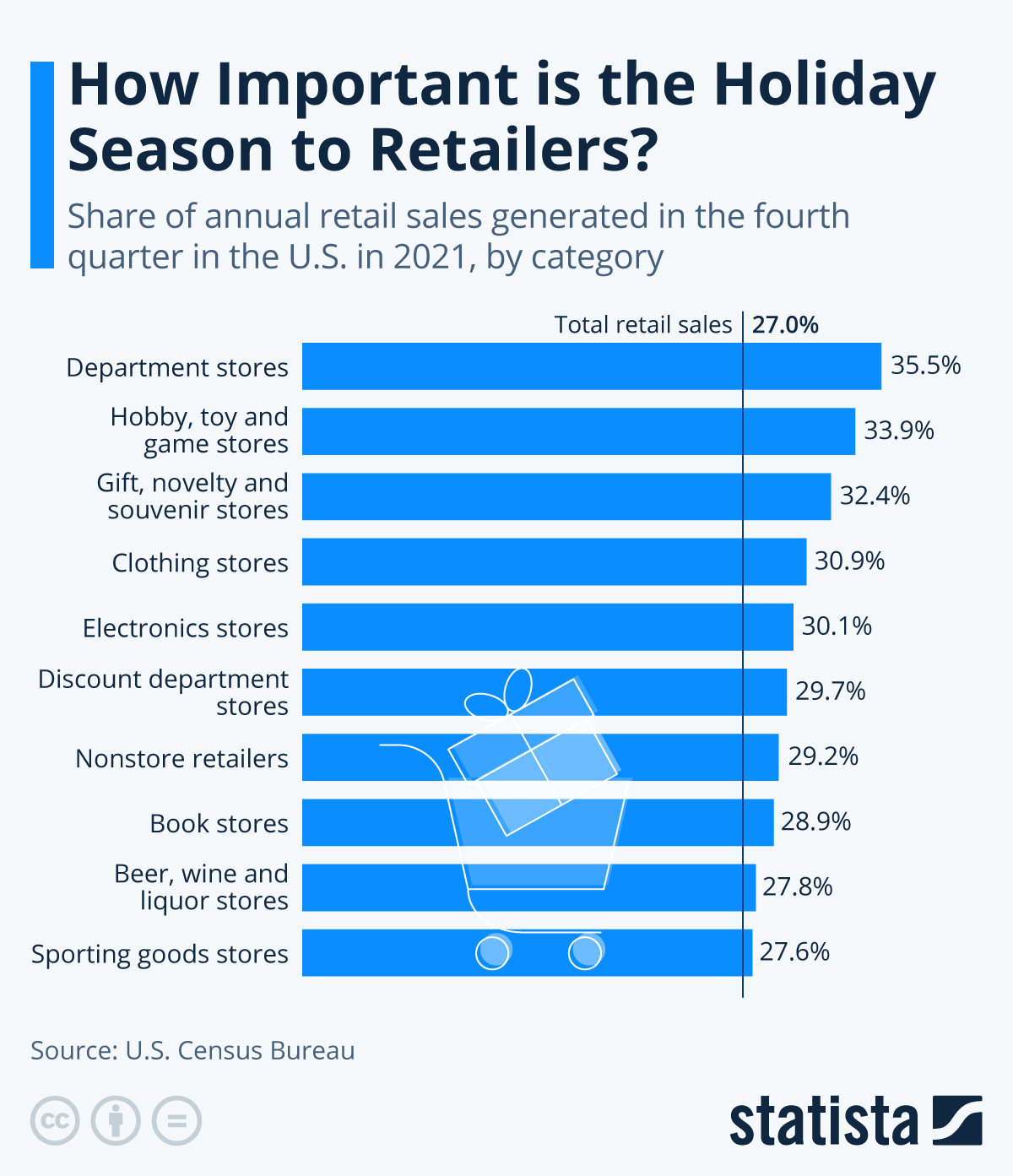 “So if anything, those things are pushing us to open the store faster. It’s the inventory that’s really been affected.”

To open a store, you need inventory, and ordering inventory takes time.

“Things that you typically need to order 4-6 months in advance, we needed in 4-6 weeks. Add to that the fact that COVID has everyone backlogged, inventory has become our biggest challenge.”

"Things that you typically need to order 4-6 months in advance, we needed in 4-6 weeks."

“We’re certainly not in a place where we can just drop $100k on inventory in November that we won’t sell until July,” Josh explained. “So it’s been incredibly important for us to work with the local development corporation, which is supporting small businesses now more than ever, to get capital.”

💡 RECOMMENDED READING: Government Funding: How to Get Free Money for Your Retail Business

Finding help with renovations when demand is high

The pandemic also introduced another challenge—scheduling the necessary renovations for the store.

Since lockdown, people have not only been spending more time at home, but also more on their home. In fact, experts say they’re seeing the highest levels of home improvement spending ever. With the rush of people leaving the city for places like Haliburton, Josh and Erika were finding it hard to find help with things like carpentry and painting.

“These people are in such high demand that they’re booked well into 2021,” Josh told me.

“We had to get scrappy.”

When I first checked in with Josh and Erika it was October, and their store opening was still weeks away, so I decided to follow up in January to see how everything played out.

“We ended up opening about a week after our goal, so pretty much on point, but the process was pretty painstaking,” Josh told me.

As it turned out, they couldn’t escape the shipment delays that were plaguing the entire retail industry, so getting product took longer than anticipated.

But that didn’t stop Josh and Erika.

“We were able to launch not only with full inventory, but with inventory that stores that’ve been in business for years don’t have.” Josh went on to explain that Delancey Sports is now one of the only stores in Southern Ontario to offer Nordic products. How did they do it?

“Everyone was complaining that they couldn’t get Nordic ski boots, and we got them. I found a supplier in Russia that shipped via UPS, put the product on a plane, and they got here in four days. We’ve been very fortunate to find great partners on the inventory side so we could launch with everything we wanted and more.”

Josh said they’re even getting people driving all the way from Toronto to get Nordic skis because they can’t find them anywhere in Toronto.

From an outsider’s perspective, Josh and Erika pulled a rabbit out of their hat. Magicians don’t usually reveal their secrets, but I asked anyway.

“It’s just about relationships,” said Josh. “We were looking for a needle in a haystack, but once we had a few suppliers who were well-versed in our space and have been doing it for many years, you find out that they have networks, they know people. So you just ask. So they give you references and you ask those people. You just find a way.”

That same scrappiness is also how they managed to renovate the store on time too. Give the community what they want

Despite the obstacles, Josh and Erika pushed through. They not only opened when they wanted to open, they opened to pretty major fanfare.

“We received a very positive response from the community. Once we were open, a lot of folks were even just popping their heads in to say hello and welcome.”

Not only was the community response positive, but so were their sales numbers.

“We were able to do about 15 days of sales before Christmas and had a very successful run for a store of our size. Even when lockdown came into effect on Boxing Day, we were prepared for it, so it wasn’t a death blow by any means. We just went with the flow, and ended up exceeding our forecast for the month of January.” Josh and Erika said that when lockdowns went into effect, they were ready with the technology they needed to offer socially-distant shopping options like curbside pickup and local delivery.

“It feels really good to build something people want.”

While they have started a business before, Josh admits that “it’s very different to build a brick & mortar retail store than it is to build an app-based tech company. One’s scalable and venture-backed. The other is a small sporting goods store. It’s just a very different journey.”

They were able to put some of their tech experience to good use though, as Erika explained.

“Bringing a small piece of our tech experience to Haliburton has been interesting, and I think it’ll help us uplevel the store.”

If they don’t have the size shoe a customer needs in-store, for example, they can use their Shopify POS to see if they have it elsewhere and can schedule it for shipping right then so the customer can have it in two days.

Another idea they implemented was allowing customers in-store for skate sharpening even before they officially opened their doors. Erika said they used that to connect with customers and collect data that would help the store be more successful.

“When they come in, we can collect their information and then send them text messages and emails and be able to communicate with them after they leave. We’re trying to bring that new store of the future to a small town, so it’ll be really interesting to see how it plays out.”

Josh and Erika have also been benefiting from asking their customers what types of products they want to see in the store to minimize the risk of carrying inventory that doesn't move.

“We learned some things by talking to customers that we wouldn’t have considered otherwise. Things like skateboards, skooters… there’s a whole skatepark in Haliburton and people didn’t have access to a store that sold skateboards. There’s also a whole basketball league we didn’t know about. It’s all about talking to your customer.”

"We learned some things by talking to customers that we wouldn’t have considered otherwise."

The Delancey Sports guide to opening a retail store

If you want to know what it takes to open a store, there’s a lot you can learn just from reading about Josh and Erika’s experience.

But I also asked them directly—what steps would they encourage someone who’s interested in opening a store to take?

“The fact that we were able to do this from scratch and build out the vision we’ve created over the past 6 weeks is pretty damn exciting and fun. We’re still new, so I don’t want to say it’s easy, it’s not. But there is a recipe."

"If you’re making smart decisions, just do it."

"It’s so common today for people to have all the ideas and dreams in the world but don’t execute. We’re the opposite. If you’re making smart decisions, just do it.”